Jazz Fest Review: Cecile McLorin-Salvant | Kids Out and About Houston 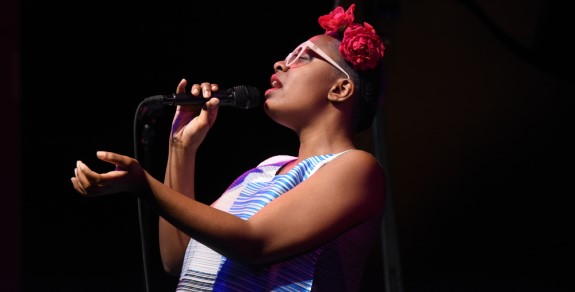 Cecile McLorin-Salvant emerged quietly onto the Kilbourn stage shortly after her band (the Aaron Diehl Trio), sporting her trademark glasses. With a finely tuned and highly expressive voice, her set covered a wide range of material, with an even broader range of emotions. With the brilliant though often understated Aaron Diehl on piano, the creative and swinging Paul Sikivie on bass,  and the always grooving Lawrence Leathers making it look easy on drums, the listener was treated to a magical musical tour of swirling dynamics and colors, now portraying riveting drama, now lighthearted comedy.

I’ll be the first to admit – the human voice is generally not my favorite jazz instrument. Scat singing is typically not my favorite type of jazz improvisation. Fortunately, Cecile – elegant and mysterious diva though she might be – was highly personable and accessible and yet not at all ordinary. With her charismatic presence and quirky ways, she pulled you into her world where nothing stays the same. Her sense of timing kept you on the edge of your seat. Her phrasing was fluid, though perfectly controlled, with a Monk-ish way of wandering into the weeds only to emerge perched precariously on a rock.

Why is she so engaging? For one thing, intensity prevails, but suddenly the storm gives way to a sunny moment: the ugly sisters in Cinderella bemoaning their fate: “Why would a boy want a girl like her – a frail and fluffy beauty? Why can’t a boy even once prefer a solid girl like me?” Perhaps Cecile had been there herself once, but the delivery is lighthearted and buoyant. How about her unique renditions of ballads, from the now not-so-familiar “Spring Can Really Hang You Up the Most” to that sad-yet-funny ode to the cheating womanizer and its perfectly placed punch line? And here and there the band cuts loose, Diehl delivers sparkling and inventive lines in the upper register, or almost violent staccato bursts of ten-fingered chords. The final piece was a terrific closer – Something’s Coming from West Side Story: an epic, carefully crafted arrangement which nevertheless had plenty of opportunity for the musicians to stretch out and unleash their chops. A single riveting encore followed, accompanied only by Diehl: the nightmarish imagery of Strange Fruit hung in the air like a fog, as the crowd dispersed.

Steve Santini writes music reviews for Beyond The Nest when he's not busy playing with his grandkids or his guitar.